I’m almost frightened to ask this, but do you, or anyone, know how safe or unsafe the “hot cups” are from Starbucks?? I love that they serve organic milk, but what happens to it once they pour it in those bleached paper cups?!

I went down to Starbuck’s and got a paper hot cup. Looks pretty white to me. But then I noticed that it says right on the cup, “Made with 10% post-consumer recycled fiber.” So I called the corporate headquarters and was told that their coffee filters, paper cups, and paper food contianers are whitened with a “nontoxic bleach.” I was glad to hear that about the coffee filters!

Now I know there are two processes for bleaching paper. One uses chlorine, which produces very toxic dioxin, which can leach into foods and beverages from paper packaging. The other uses oxygen bleach, and it doesn’t form dioxin.

Given the information given to me by Starbuck’s I would say they are aware of the dioxin problem with chlorine-bleached white paper cups, and are using a safely bleached cup.

Recently there was an incident in our area of some people getting very ill, and one person dying, from drinking punch that was stored in containers that had windshield wiper fluid.

It got me to thinking of the toxicity of this stuff that we spray all the time into the environment.

Does anyone having any stats on this? It would be interesting.

Wondering if anyone knows of a product, commercial or home-made, that does the job. I am up in Ontario and it gets pretty cold here, way below zero. So it can’t freeze. That might be the hard part.

Anyway, look forward to being part of this blog. There is a lot to learn.

I think we’re going to need to figure this one out all together.

For those of you who are not aware of what windshield wiper fluid is made from, it’s methanol, a very toxic solvent (see Methanol Poisoning Overview). In addition to our own exposure, when we use methan

Vinegar and hot water! I wrote all about this in my book Home Safe Home.

You have been and continue to be a life saver for me and so many other people. Thank you so much for all your kind work.

I am chemically sensitive and I have a Jacuzzi where I take a whirlpool bath each night to help me with chronic back pain. I have not been able to find a non-toxic product to do heavy cleaning of the jets and circulation system.

Do you know of any products I may be able to use or where I might do research to help me find a useable product? My husband, lucky me, does all the cleaning so I wouldn’t have to do cleaning but I find it difficult to be in the steam of a hot bath where toxic products have been used. Anything you can do to help would be greatly appreciated. Thank you again.

Don’t have a jacuzzi, so don’t have any experience with this. Readers?

What cleaning product can be used in tubs and showers that will work as effectively as Tilex which is very toxic. Any help is much apprciated. Thanks Robyn F.

This has been answered at Q&A: How Do I Remove Mold from the Shower Floor Tile?.

New book on dangers of RBGH in milk

I’d like to recommend a new book on the dangers of RBGH I came across, It’s called What’s In Your Milk? An Exposé of Industry and Government Cover-Up on the DANGERS of the Genetically Engineered (rBGH) Milk You’re Drinking by Samuel S. Epstein, MD. In it, Dr. Esptein tells the dangers of rBGH and why we should drink certified organic milk.

To read more about it go to http://www.preventcancer.com/publications/WhatsInYourMilkRelease.htm.

Hi! Does anyone have suggestions for a good alternative for plastic freezer bags? I’ve tried using cellophane bags, but they tear easily. I also use glass containers in the freezer, but they take a lot of room. Would love a recommenation for a nontoxic freezer bag that is durable.

Bromate (Potassium Bromate) is calmly entering our FLOURS and bake goods! What is going on???

Where can we find ‘Organic Unbromated Flour’???

Potassium bromate (KBrO3) is a bromate of potassium. A bromate is a chemical compound that is formed when ozone and bromide react according to a specific chemical reaction.

Potassium bromate is typically used in flour to strengthen bread dough (bread of all kinds, including rolls, buns, and other bread products) and allow higher rising. It is also used in doughnuts and cakes. It may appear on the label as “potassium bromate” or “bromated flour”, but may also be present in products that don’t have labels, such as deli sandwiches and bakery products purchased unpackaged.

Under the right conditions, potassium bromate is completely used up in the baking bread and none remains in the finished product. If too much is added, or if the bread is not properly, then a residual amount will remain, which can be harmful to health if consumed. In 1992-93 and 1998-99, the FDA tested several dozen baked goods and found that many contained bromate at levels they considered to be unsafe. Yet, the agency still allowed this additive to be used and that continues today.

The International Agency for Research on Cancer (IARC) considers bromate to be a category 2B carcinogen (possibly carcinogenic to humans). Bromate was first found to cause tumors in rats in 1982. It has been banned from use in food products in Europe, the United Kingdom, Canada, and most other countries.

Though potassium bromate has not been banned In the United States the FDA has urged bakers to voluntarily stop using it since 1991. In California bromate was declared a carcinogen under Proposition 65, requring that baked goods sold in California would have to bear a cancer warning if they contained more than a certain level of bromate. Rather than label their baked goods as being carcinogenic, most California bakers have switched to bromate-free flour.

New carpets were just laid down in my friend’s workplace a month or two ago – I think they are made of nylon. A couple of weeks ago she started feeling ill – nausea, dizziness, sinus congestion, and severe lethargy. Her doctor told her it was a virus, or possibly irritation of childhood ear injury. Could these symptoms be from the carpet? Are there any tests doctors can perform to determine whether patients are having a toxic reaction, or are there tests that can be done on the carpet itself to measure outgassing? Thanks for your responses!

Absolutely it can be the carpet, and I would venture to say it probably is.

There are tests that can be done for toxic chemicals in the human body, but I understand they cost around $15,000.

Anderson Labs can test your carpet sample. They put your sample into a glass chamber and collect the chemicals it releases. Then laboratory mice are given the air from that chamber (containing the pollutants from your item) to breathe and ill effects (on eyes, nose, throat, lungs, and nervous system) from breathing that air are noted. This test does not identify the toxic chemicals, but does determine they are toxic. This kind of test costs about $1000.

The only nonstick cookware in my home are the muffin pans. I want to get rid of these pans, but my children love organic muffins with raspberries from the garden. The only alternative I have found are cast iron; however, the reviews of the Lodge cast iron muffin pans state the muffin size is smaller than normal. Do you know of any other safe muffin pans or cast iron versions that offer regular size muffins?

I don’t know offhand. I have some unknown metal ones that are non-stick, but I’ve had them for years and rarely make muffins. 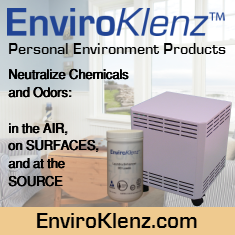