I would like to order some canned beans to have on hand for disaster purposes. These say the can is bpa free but how do I know if it’s bps which I read is even more toxic. (Or in case of disaster, do I care?) I have some powdered beans but that would require boiling water.

Because of dental issues I am limited as to what I can eat, but what do environmentally sensitive people do re: disaster foods?

First, how do you know if a “BPA-free” can is BPS or not?

So I went to the VitaCost website and asked their customer service chat “If your can linings aren’t BPA, what are they instead?”

The chat representative couldn’t answer that (and there was no information on their website) so she sent my question up to a higher authority, who did answer my question within two hours. Here’s their response: 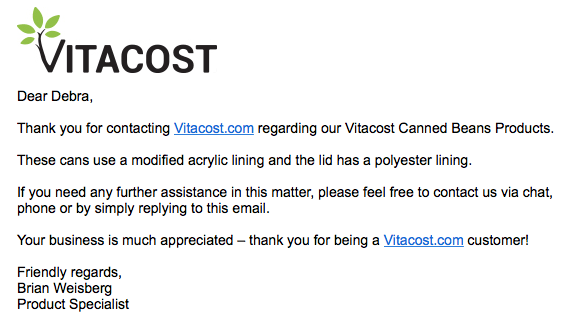 Now this does tell you it’s not BPS. But what about this modified acrylic and polyester?

I searched further and found a detailed report on this very subject called BPA: Buyer Beware.

Researchers found five major coating types are being used in can linings. In addition to the BPA-based epoxy, there are four “BPA-free” alternatives:

Multiple formulations of these chemicals are used to make can linings and “there is no way to determine the specific chemicals used or how they are produced.” I would just add this points to one of the major problems with “free” labeling. It may be free of one chemical, but may contain others. This is why I look at what materials are actually being used (to the degree I can get the information), rather that the list of what’s not.

So I’m thinking the “modified acrylic” used in your black bean cans is modified with styrene.

And I’m thinking that polyester resins are used mainly for lids and not for can linings.

As food packaging is the larger source of exposure to BPA (BPA easily migrates from food packaging into food and drink), the best way to reduce your exposure to this hormone disruptor is simply do not eat or drink packaged foods and beverages. Within days BPA will leave your body completely.

BPA: Buyer Beware—Toxic BPA and regrettable substitutes found in the linings of canned food
This report, compiled by an alliance of toxics organizations, identified and analyzed the interior linings and lids of nearly 200 canned foods.

As for disaster foods, last year I wrote a post on my Toxic Free Kitchen blog called My Idea of 72-hour Emergency Food in which I outlined how I would put together a 72-hour emergency food supply to suit my own preferences. There were no cans.

I’ve never actually been in such an emergency myself but some years back after hurricane Charlie I volunteered to do disaster relief and my job was to hand out emergency meals. They were just sandwiches and cookies and apples and chips in a box with a bottle of water. If any of these people had emergency rations on hand, they were, literally, blown away. Their homes were gone, along with all their possessions.

So just think about what your disaster might be and plan accordingly.

Last night Larry and I went to see the film The Zookeeper’s Wife, which was about a woman who hid Jews from the Nazis in her zoo during World War II. In the end, everyone had nothing. No amount of planning and being prepared can stand up to mass bombing.

And if you are ever in that situation, dear reader, I think the greatest good would be to eat any can of beans you can get your hands on, even if they contain BPA.