Formaldehyde Emissions from Silicone and Other Materials

Update June, 2020:  Read more on The Toxicity of Silicone

Though I continually am searching for scientific data on the health effects of silicone, this was news to me.

But having the clue that silicone releases formaldehyde, I was able to find information on this.

Exposure of silicone products to high temperatures in air can give rise to formaldehyde. However, compared to some organic materials such as mineral oil, silicones release only a fraction (about 1%) of the formaldehyde, presenting a significant reduction in the potential exposure to this hazardous chemical.

They go on to refer to a study that shows the temperature at which formaldehyde is released from materials depends on the type of material being heated. It costs $50 to read this study, so I didn’t read it.

Dow Corning states that where there is prolonged heating of silicones or any other organic materials, “it is important to ensure that adequate ventilation is provided.”

This wasn’t very informative, but I continued to search and found Formaldehyde Generation from Silicone Rubber. I’m going to now give you a paragraph from this paper that explains how formaldehyde can be released from silicone. It is fairly technical, so I’ve edited it a bit and divided it into pieces to make it easier to read.

Silicone rubber is a polymer consisting of an inorganic siloxane (-Si-O-) backbone and two organic functional groups bonded to each silicon atom.

The organic groups are most often methyl, but may include vinyl, phenyl, hydrogen, hydroxyl and/or trifluoropropyl.

The type and quantity of organic functional group is varied to impart certain physical and/or chemical properties to the polymer.

Thermal oxidation of methyl groups begins at 149o C [300o F] with the formation of a peroxide on the methyl group followed by scission of the Si-C bond leaving a free radical on the silicon atom and a departing peroxide. The peroxide decomposes to a hydroxide ion and formaldehyde.

A portion of the formaldehyde can decompose to carbon monoxide, hydrogen, carbon dioxide, and water. It is this portion of the mechanism that gives rise to the volatile organic products of the decomposition.

The hydroxide ion and the free radical silicon atom can react with each other, or with other methyl groups, eventually leading to the decomposition of the methyl groups and the formation of non-volatile silicon dioxide.

In addition to the volatile organic products listed, trace amounts of methanol and formic acid can also form during thermal oxidation.

Here are the VOCs generated during thermal oxidation of a typical silicone rubber containing only methyl function groups.

The paper goes on to state that silicone ribber is not the only material that generates formaldehyde during thermal oxidation. Dow Corning measured formaldehyde generation rates of various materials, summarized in the table below. 200 degrees C is about 400 degrees F. This would only be an issue in a situation like putting the material in an oven to bake it, or using it in an industrial application. These materials would not encounter 400 degree F heat in a home unless there was a fire (and then the health effects of smoke inhalation would be greater than any exposure to formaldehyde).

By contrast, Dow Corning measured a “high consistency silicone rubber” to generate formaldehyde at these rates:

Another study Regarding the Evolution of Formaldehyde from Polydimethylsiloxanes states that OSHA’s hazard communication requirements apply to formaldehyde releases greater than 0.1 percent. GE Silicones elected to include formaldehyde warning statements on some of their silicone products that might be subject to conditions under which formaldehyde might be generated to this level.

Here are their results for silicone testing: 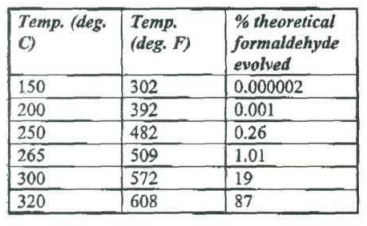 They concluded “there is very little formaldehyde evolved until about 200°C (392°F).” This may be where my reader got this number.

Once again I am prompted to say that the problem we have as consumers is we don’t know exactly what type of “silicone” is used in any “silicone” product.

We don’t even know if a silicone baking form or silicone baking mats are even the “methyl” type that releases formaldehyde. This research was done on industrial silicones used at high temperatures.

Given this information, I would say it would be prudent to not use silicone for baking above 300-350 degrees F. But it’s probably fine for most baking below 300 degrees F.