Want a Turkey Worth Gobbling? Here’s What to Look for on the Label 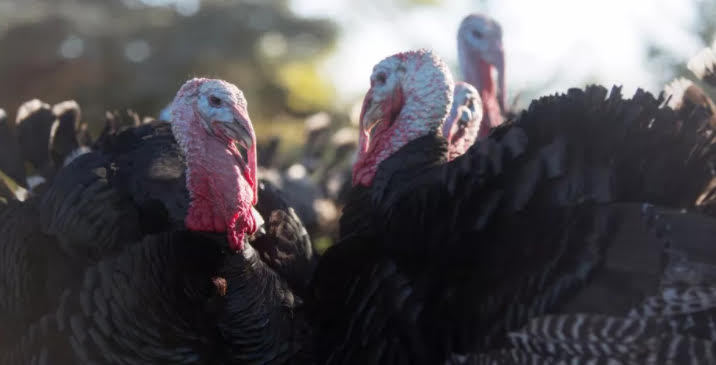 A couple of nights ago around the dinner table I asked my new family what everyone wanted for Thanksgiving dinner. Turkey, of course, homemade cranberry sauce, and gluten-free cornbread and rice stuffing with wild mushrooms topped the list. Since, as the best cook in the house, I’ll be doing most of the cooking, and we are living in Sonoma County, California—where we actually grow and raise some of the best food on Earth—I started wondering if we could get some kind of special turkey.

So I put together this list of what to look for on the label to help me find the perfect turkey for this year’s Thanksgiving dinner.

Here’s What You Get When You Buy a Cheap Turkey

The first thing to know about cheap turkeys is they are a hybrid breed that have been created to produce a lot of breast meat “Broad-breasted White” they are called. These turkeys are now so large that all are artificially inseminated because they simply can’t do it themselves.

They are also so big they cannot walk.

They are also bred to grow faster than the natural turkey and are give growth hormones.

These turkeys are raised in factory farms in overcrowded conditions.

Their feed is made from GMO corn and soy that has been sprayed with pesticides.

Excessive quantities of antibiotics are given to birds, and other chemicals may be used in processing.

The word “natural” on the label of a turkey refers to how a turkey is processed, not raised.

A product can be claimed natural if it is minimally processed and contains no artificial ingredients, including chemical preservatives.

According to the USDA, “all natural” meats and poultry can only be called such when:

The USDA only approves phrases including “raised without antibiotics,” “no added antibiotics” or “no antibiotics ever,” which indicate the animal did not receive antibiotics in their feed, water or by injection. The phrase “antibiotic-free” is not approved for meat and poultry labels.

Natural turkeys are hybrid Broad-breasted Whites and the meat would still have pesticide residues from their feed, Most are fed a “vegetarian” feed made up of GMO corn and GMO soy. But “all natural” is a step in the right direction.

Your local natural food store will certainly carry an all-natural turkey and you might find them in some higher-end markets as well. They are slightly more expensive than the cheap turkeys and a good choice if you can’t afford organic.

Once again, organic turkeys are hybrid Broad-breasted Whites. The difference with organic is they are raised with certified USDA organic practices, so the meat is free from hormones and other growth regulators, antibiotics, GMOs and pesticides. They are usually farm raised and often drink well water.

Most natural food stores sell organic turkeys. They are twice the price of natural turkeys. 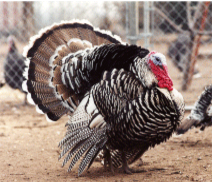 A heritage turkey is one of eight specific breeds certified by the American Poultry Association. These breeds were raised in the USA prior to the 1950s, when the poultry industry began to cross breeding the commodity Broad-breasted White turkeys that are commonly sold today.

“Heritage” does not mean organic, all natural, or free range, though a true heritage bird should be free of artificial ingredients, raised on a farm and eat feed free from pesticides.

Heritage birds are different from Broad-breasted Whites in a number of ways. They:

I’ve read that heritage birds are juicy and succulent and taste the way a turkey is supposed to taste. The meat is darker and gamier-tasting and tougher, so you won’t have the Broad-breasted White experience. And it can be harder to cook (here are some tips) . But you’ll actually be eating turkey, the same turkey everyone ate before 1950.

As of this writing there is no official certification program for the identification and labeling of heritage birds the way there is for organics. Although turkey producers are required to submit documentation to the USDA showing that the turkeys they’re going to call heritage are one of the officially recognized heritage breeds, this process is not as strict and regulated as needed to be dependably reliable.

Here’s where you really need to know your grower and ask questions and not rely on labels.

If you are willing to spend more money, do a little advance planning, and look beyond even your local natural food store, consider a heritage turkey. I’m considering this now because for once in my life I want to experiencing eating a REAL turkey.

When I used to live in a small village in a rural part of Northern California, we had wild turkeys and some of the locals would hunt and eat them. I never did but I’m very curious to know what they taste like.

You can purchase wild turkeys online that have been farm-raised on natural forage with supplemental feed.

Wild turkeys are small birds with a slightly gamey flavor

Now this would be more like the turkeys served at the first Thanksgiving.

The Turkey I Chose This Year

After all this research, I decided to pre-order a heritage turkey, grown by local Sonoma County 4H club members and sold through the Slow Food Russian River Heritage Turkey Project.

You can only get one if you come pick one up in Sonoma County, California. But look around your local community. There might be a similar program.

At $9.00 a pound, it will be the most expensive turkey I’ve ever purchased, but it will be well worth it. In addition to the enjoyment of flavor and satisfaction of curiosity, I will also be contributing to the education of future farmers and the preservation of heritage breeds, and I will experience food closer to it’s original state in nature. I think that’s an excellent investment.

I’m actually going to see if I can participate in the whole experience of visiting my turkey live and being at the slaughter instead of just picking it up in a bag.

I’ll let you know how this goes.